Background: Various training methods such as lecture-based and media-aided methods are employed to train focused assessment with sonography for trauma (FAST) technique during internship period. The current study aimed at comparing the efficacy of lecture-based and CD-based approaches among medical interns in emergency wards.
Methods: The current comparative study was conducted on 128 interns randomly assigned into two training groups. The first group (n = 64) was trained through a one-hour training program based on CD in a single session, and the other group (n = 64) was trained through a one-hour face-to-face slide-based session. Before and immediately after the training sessions, the participants were asked to answer the questions about the FAST technique. Also, the questionnaires were emailed to the participants one month later.
Results: The mean assessment score was significantly higher in the group trained through the lecture-based method compared with the ones trained with the CD-based method immediately (P <0.001) and one month (P = 0.003) after training. With regard to practical training, the subjects trained through the lecture-based method achieved higher assessment scores than the ones trained through the CD-based method (P = 0.042). A significant increase in the mean assessment score was noted immediately after training (P = 0.023), while a significant reduction in the mean score was found one month after training (P = 0.015) in both groups.
Conclusion: The use of the lecture-based approach for FAST training was more effective than the CD-based approach among emergency ward interns.

Overall, 10% of the total deaths from trauma are because of damages to the abdominal organs (1, 2), and one of the main reasons for the high mortality rates from trauma is delayed diagnosis of patients with high-risk abdominal injuries (3). Also, incorrect assessment of the severity of abdominal lesions is one of the leading causes of preventable deaths in blunt abdominal trauma (4). The most important issue to treat patients with blunt abdominal trauma is early and prompt diagnosis in the ones requiring immediate surgery. Previous studies show that physical examination is not very reliable to judge probable abdominal injuries. In this regard, proficiency in a fast and accurate way becomes a concern since it can properly assess the abdominal trauma.

Focused Assessment with Sonography for Trauma (FAST) can be a good alternative for peritoneal lavage, or computed-tomography (CT) scan in abdominal trauma is even accepted as the first choice to assess blunt abdominal injuries caused by trauma (5,6).

Diagnostic approaches in blunt and penetrating abdominal trauma are very different. In penetrating injuries such as gunshot wounds, due to 90% probability of internal injuries, there is little need for preoperative diagnosis and laparotomy is mandatory, while abdominal assessment in patients with blunt trauma is very important due to hidden intraabdominal bleeding (7, 8). Thus, delayed diagnosis of hemoperitoneum may lead to patient’s death. The objective of the FAST technique is not the assessment of the entire abdomen, but to assess especial anatomical areas to detect free fluids or blood in the peritoneal cavity (9, 10). This method can be used in emergency wards and in hospitalized patients with unstable hemodynamic status.

The use of FAST as an accurate and low-cost diagnostic modality in patients with trauma is emphasized, and thus the application of this method is trained among surgeons and paramedics for many years. The process of medical education depends on several factors such as training materials, students, professors, educational fields, applied technologies, etc. E-learning is one of the medical education methods. Research demonstrated that the developed countries such as US, UK, China, Canada, and Australia are the pioneers of e-learning in medical education. One of the advantages of e-learning is the access to all people everywhere in different locations (11). In fact, educational officials always focus on the effectiveness of e-learning on augmentation of students’ knowledge and attitudes. E-learning is a novel method in medical education. In recent years, its implementation in medical education systems is suggested and practiced. In this regard, different training methods such as lecture-based or media-aided are employed among trainees. The current study aimed at comparing the efficacy of lecture-based method and training by CDs (media-aided) among medical interns in the emergency wards.

The current randomized, double-blind, controlled trial was performed on 128 interns spending their six-month training course at the emergency ward of Rasoul-e-Akram Hospital, Tehran, Iran in 2014. The inclusion criterion were interns of emergency medicine and the exclusion criteria were unwillingness to cooperate with the study and absence in the pre- or post-test (only one or both). The study objectives were explained to all participants and they signed the written consent form. Ethics committee of Iran University of Medical Sciences approved the study (Ethics committee code: 2288/105/D/92). The individuals were randomly divided into two training groups. The first group (n = 64) was trained through a one-hour training program based on CD in a single session and the second group (n = 64) was through a one-hour face to face slide-based session. The pretest session was held for all participants. The multiple choice questions (MCQ) were designed according to the guidelines for training the Focused Assessment with Sonography for Trauma (FAST) technique. Experts from medical scientific board of Iran University of Medical Sciences evaluated the face and content validity, while their suggestions were considered too. Before and immediately after the training sessions, the participants were asked to answer some questions about the FAST technique. Also, the participants were asked to respond to the questionnaires emailed to them one month later. Furthermore, the participants were examined by models after training sessions. After the pretest, CD was adopted in group 1 and lecture-based learning in group 2. A software containing the guidelines for training the FAST technique was given to group 1. It included a video of classroom and a film of teaching FAST. They had 2 weeks to study the CDs at home.

Results were presented as mean ± standard deviation (SD) for quantitative variables and summarized by absolute frequencies and percentages for categorical variables. Categorical variables were compared using Chi-square test or the Fisher exact test when more than 20% of cells with expected count of less than five were observed; quantitative variables were compared using t-test. The difference in assessment score after training compared with before was assessed by using the paired samples t-test. The trend of changes in assessment score after training was tested by repeated measures ANOVA. For all the statistical analyses, SPSS version 16.0 was used. P-values less than 0.05 were considered statistically significant. IRCT registration number was IRCT2014121620344N1.

Table 1. The assessment score after training methods compared to before that 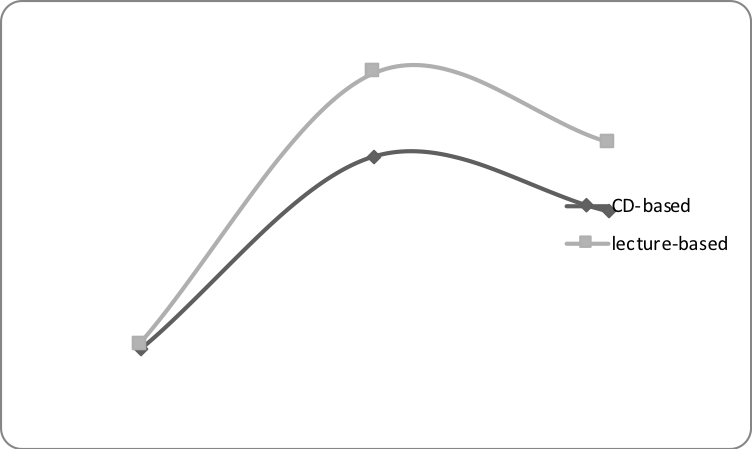 Figure 1. Trend of the change in assessment score in two training methods

The mean assessment score was significantly higher in the group trained through the lecture-based method compared with the ones trained with the CD-based method immediately and one month after training. Since the health care system expects medical graduates to deal with patients with multiple traumas using appropriate lifesaving practices, and since emergency medicine internship period is when interns can effectively contribute to the education of students with optimal life-saving actions, so one of the main challenges of learning systems and decision makers of clinical education is the renewal of teaching methods and employment of teaching aids in order to provide the best education. By benefiting from educational programs, it is possible to help people achieve the necessary competence in their fields. The goal of medical community education is to promote knowledge and practice of health care to promote community health. In this regard, medical training can be provided through lectures, training manuals, visual, aural, and electronic training methods including the use of simulations (11,12).

Among recent medical educational programs, two general methods are developed including 1) teacher-centered approach in which the teacher is the mainstay and 2) student-centered approach where particular attention is paid to the students’ needs and abilities (13). The current study aimed at assessing the quality of training FAST to interns by teacher-centered approaches including face to face lecture and presenting a CD. Results of the current study showed that the method of face to face lecture was better than training by media to educate the FAST. It should be noted that the improvement of students’ knowledge regarding this modality was achieved by assessing the results of the two approaches and comparing them with those obtained before training.

No similar studies compared the two mentioned training approaches, but in a study by Platz et al. (14), no difference was observed between web-based and lecture-based training methods. In fact, CD-based method is a new educational method, the efficacy of which was not previously examined. In a study by Filippucci et al. (15), the efficacy of web-based and traditional training methods was compared, and it was revealed that the web-based method was not appropriate for training purposes and it might even result in barriers to education. However, Chenkin et al., (16) indicated that web-based training could be as effective as the traditional education.

In fact, CD-based training did not have adequate efficacy to be replaced by traditional method. However, the results of the current study might be affected by the lack of preparations of Iranian students for education through software, or the lack of adequate knowledge about FAST among Iranian interns. The necessity to employ educational software in medical training, especially in medical emergency field, is taken into consideration by scientific communities (17, 18). It seems that in order to exploit the benefits of these educational methods and create the necessary conditions for more interns and assistants, more essential measures should be adopted.

In sum, lecture-based approach was more effective than the CD-based in training FAST approach among interns of emergency wards. However, it is recommended that the major barriers to be removed, so that it can facilitate a combination of both lecture-based and media-based methods.

The authors are grateful to all interns who participated in the study. Special thanks to Emergency Medicine management research center, Iran University of Medical Sciences, Iran for all the material and funding support to the current study.