The role of training in parents of patients with Hirschsprung disease, accompaniment of the health service staff and the patient's parents

Background: Parent training is an appropriate way to increase their awareness in dealing with a sick child. Childhood illness causes parents to be worried and stressed. Lack of information about disease will increase their concern. Educational programs can reduce parental stress and postoperative complications.
Methods: In this study, the mothers of Hirschsprung Disease (HD) patients were selected to examine the disease training. The sampling was started by the census method from 2014 and continued until 2017. The statistical population included 2 groups of 30 mothers whose children were less than 6 months old. In one group, disease training was with a doctor and a trained person (group A). In another group, the mother of the treated child was also added to the training group, she was under the control of the educational staff (group B). The designed questions were asked from mothers in both groups before and after the training. The satisfaction level of training was also examined. Finally, the SPSS 23 software was used to analyze the data.
Results:The provided training was effective in both groups because the percentage of the responses to questions has significantly increased after the intervention. The results indicated that group B was more satisfied with training.
Conclusion: The results showed that the mother’s presence of a child with HD while her child is treated and entered the community had a positive effect on the training and comprehension of the disease in patients’ parents.

Parent training is an appropriate way to increase their awareness in dealing with a sick child. Education is a psychological training approach that teaches executive techniques and, it can be effective in dealing with child problems. Parent educational methods are standardized programs with short-term intervention that train parents specialized strategies and, they can help to solve significant clinical problems. There are also hidden strategies within educational programs that increase the tolerance and acceptance of the problems (1, 2).

Childhood illness causes parents to be worried and stressed. Lack of information about disease will increase parents’ concerns (3). Furthermorethe environment of hospitals and health centers is stressful. Educational programs can reduce parental stress and postoperative complications. It also increases their trust in the medical staff (4). Several diseases are commonly found in pediatric surgery including head and facial disorders, diseases and disorders of the digestive and urinary system, etc. These diseases need surgery while bringing a lot of stress for the parents. In this study, the mothers of Hirschsprung disease (HD) patients were selected to examine the disease training (5). HD causes many problems before, during and after surgery for the patients and parents. These patients usually undergo surgery at infancy; what makes parents be worry. The most common surgery that is initially considered for these patients is colostomy (6). Gastrointestinal colostomies are more unpleasant than urinary system colostomies. The high volume of the materials and its unpleasant smell are not acceptable for parents. Therefore, disease training is essential to reduce the parents' concerns.

HD is a congenital defect that causes all or part of the intestine miss nerve cells. This is due to the inability of neural network cells to migrate, proliferate or differentiate in the intestinal wall. The most commonly exposed area is recto sigmoid. Several manifestations have been reported for HD. The most common manifestation of disease is neonatal obstruction. The child is referred with abdominal distension, inability to breastfeed, vomiting and failure to pass the stool. Constipation and gastrointestinal infections are another less common manifestation of the disease (7). The prevalent surgical procedure for these children is a three-step operation: colostomy, the definitive pull-through surgery, and re-closure of the colostomy (8). Colostomy complications, especially in children, are remarkable. Descriptions of colostomy care and parental support are effective in improving the child's condition.

The main issues of the present study are, developing a new curriculum and using provided training for parents of a child with HD to train other parents with a child with the same disease while monitoring them.

This study is a clinical trial study. In this study, pre-test and post-test methods with control group were used. The sampling was started by the census method from 2014 and continued until 2017. The statistical population included 2 groups of 30 children’s mothers whose children were less than 6 months; they have been diagnosed with HD and, have been referred to the children’s hospital for colostomy.

The following cases were excluded: illiterate mothers or those who gave up to continue their cooperation. Patients' mothers were randomly divided into two groups through random numbers table. And they were supported by the educational group from the moment of the colostomy.

The medical staff designed five key questions related to HD. And the level of the satisfaction of training was also examined with one question. The questions were asked of mothers in both groups before and after the training. The questions included the following:

In one group, disease training was with a doctor and a trained person (group A). In another group, the mother of the treated child was also added to the training group. Her child entered the community at the time of the study (group B). The base of training was the same in both groups and no group were deprived from training. But, both the expression and handling of the problems in group B were different. In this group, the mentioned mother gave her experience to other mothers step-by-step and under the management of the therapeutic team.

Scores were assigned to each question for evaluation. Finally, the SPSS 23 software and chi-square test was used to analyze the data.

Sixty individuals were entered in this study and were divided into two groups (A and B). The provided training was effective in both groups because the percentage of the responses to questions has significantly increased after the intervention (table 1 and fig1). The statistical analysis of group A data showed post-intervention responses has significantly improved in relation to questions 1 and 2 (p<0.05). The difference about other questions in group A was also evident before and after the intervention but, it was not possible to calculate the P value because of the false response of all individuals to these questions before the intervention.

Table1. The frequency of the responses to questions among participants 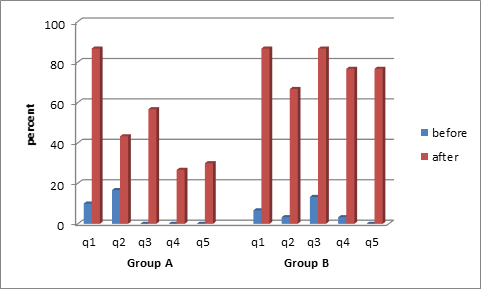 Figure1. The frequency of the true answers to questions before and after interventions in group A and B

The satisfaction level of the training was also assessed in both groups. Group B was more satisfied with training according to Fig 2. 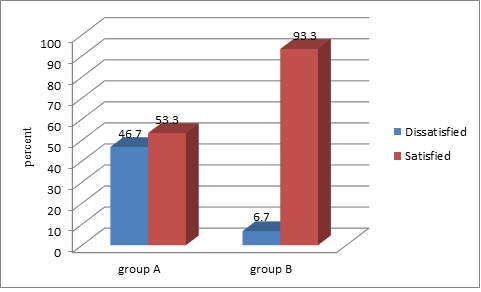 Figure 2. The percentage of the satisfaction from training in group A and B

In this study, an educational program was investigated for parents of patients with HD. Patients' mothers were randomly divided into two groups. In one group, disease training was with a doctor and a trained person (group A). In another group, the mother of the treated child was also added to the training group, she was under the control of the educational staff (group B). The results showed that the presence of the mother of a child with HD that her child is treated and entered the community has a positive effect on the training and comprehension of the disease in parents of the patients. Furthermore the presentation of existing and forthcoming issues by group B caused more awareness and confidence in them.

The effectiveness of parental training has been proved in various studies. Matthews et al. investigated the effectiveness of a 4-week training program for parents of children with autism spectrum disorder. Parents and children were studied in two case and control groups for three months. Results indicated that training programs are effective methods to intervene in child’s development and increase the parents’ knowledge about autism and the service system, as well as child responsiveness (9). In another study done by Streisand et al. pediatric parenting stress among parents of children with Type 1 diabetes was surveyed. They showed that additional diabetes training and counseling was useful for parents while decreasing parenting stress and improving child-health outcomes (10). Beirami et al. also revealed that training has been used to control the anger of the parents and reduce the child's behavioral problems. In their study, the training target group was the parents of children with epilepsy and attention deficit hyperactivity disorder (11). These studies used conventional training methods but in our study, a new educational method has been used in addition to the usual educational methods. That is scientific training with slang by trained mother. To the best knowledge of the present researchers there wasn’t any study using this method. The findings indicated that this educational method is much more comprehensible. As group B gave more accurate answers to questions than group A, they were also more satisfied with training.

The majority of provided training to parents has focused on children's behavioral disorders (1, 2, 9, 11-14). And pediatric clinical training was not found by reviewing the published articles. One of the diseases that usually occur during childhood is digestive system diseases. Early recognition, treatments at the appropriate age and parent support and training are necessary to minimize both short and long-term physical and psychological complications (15). HD is a congenital disorder that is usually diagnosed in the neonate period. Precise decision making and parenting training in infancy is very important (16). The treatment of the disease beginning in the neonatal period with colostomy insertion brings many problems for parents. Then, surgical treatment and ultimately closure of the colostomy was done during the infancy period. Child with HD is undergoing surgical procedures at three stages. Each of surgical procedures has a lot of difficulties for parents. These children need care, attention and referral to the doctor for many years.

The limitations of this study included the need of an informed mother who is willing to cooperate. There was also a need of a place for parent training.

In conclusion, results revealed that the involvement of parents in their child treatment and exposing them to the educational group in chronic diseases such as HD, have a positive effect on trusting in treatment and more awareness in understanding the issues and problems. In fact, it is more understandable to explain the problems and scientific solutions in slang for the community. Using of this educational method in the treatment of the chronic and acute diseases is suggested.

The authors would like to thank from Mashhad University of Medical Sciences (MUMS) and also Dr. Sheikh and Akbar Pediatric Hospital for their cooperation.